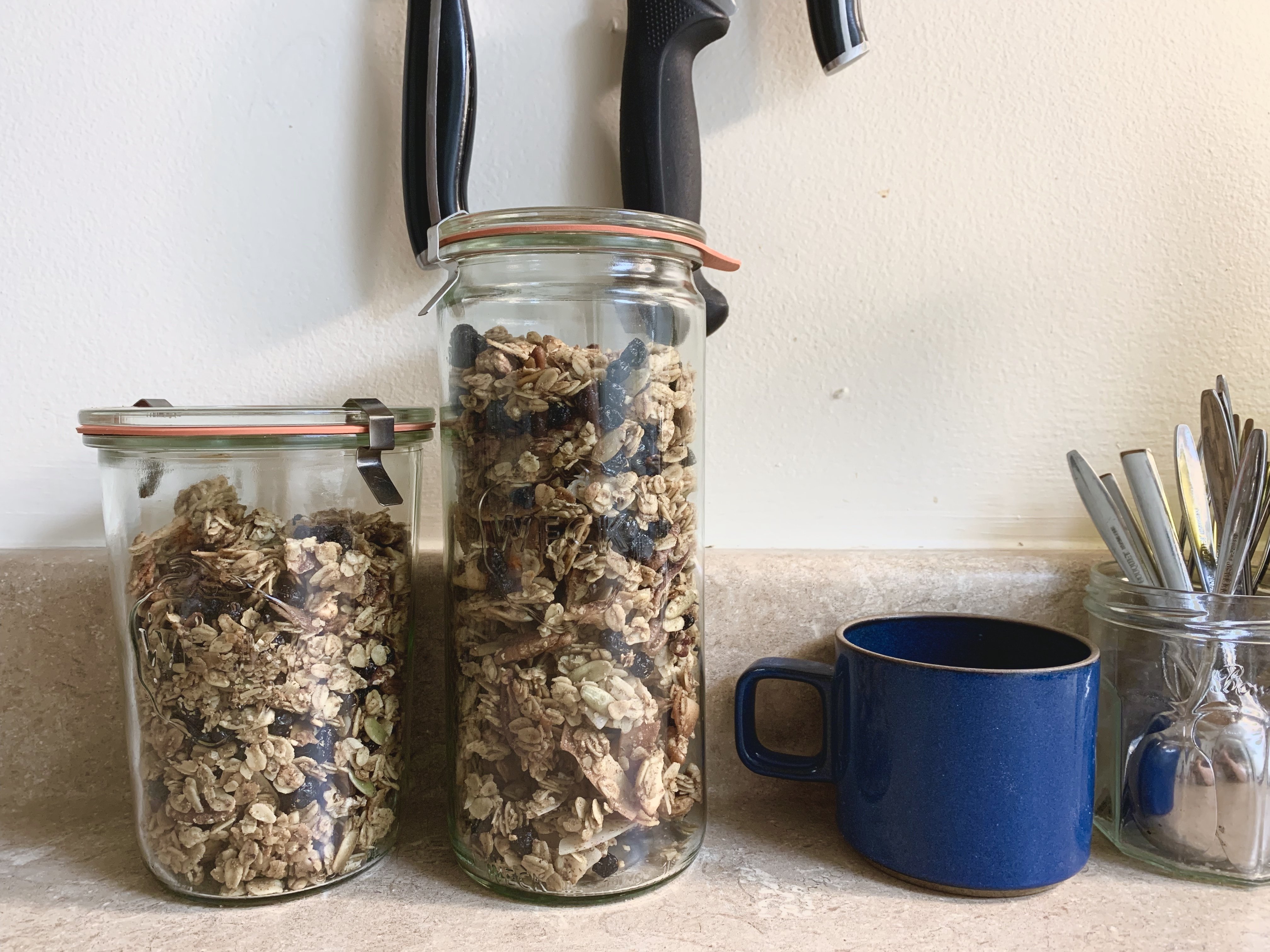 A few weeks ago I decided to repurpose some of my oatmeal / oatmeal toppings into granola.  I almost always have oatmeal, dried fruit, and a variety of nuts in the pantry.  Because it has been so hot out, a bowl of oatmeal isn’t really that appealing.  But granola?  Absolutely.  I love it as a snack because it’s so filling and packed with nutrients.  I also like that once you have a basic formula down you can customize it and make it with anything on hand.  It’s also vegan, if that is important to you.

The basic formula is oats, nuts and/or seeds, shredded coconut (but you could leave this out!), a binder made of olive oil and maple syrup, some kind of seasoning, and dried fruit.  It then gets baked at a low temperature, cooled, and then broken up into pieces.  I love that this recipe is kind of basic because I always have this stuff on hand.  I always rule out granola recipes with weird binders like brown rice syrup because I don’t like buying speciality ingredients that are kind of uni-taskers.  I also avoid granola recipes that are overly sweet.  This one really isn’t!  The only sugar is natural – from the maple syrup and dried fruit (and honestly that may have added sugar — so if this is a concern, read the label before buying).  It could even go savory by changing out the spices. 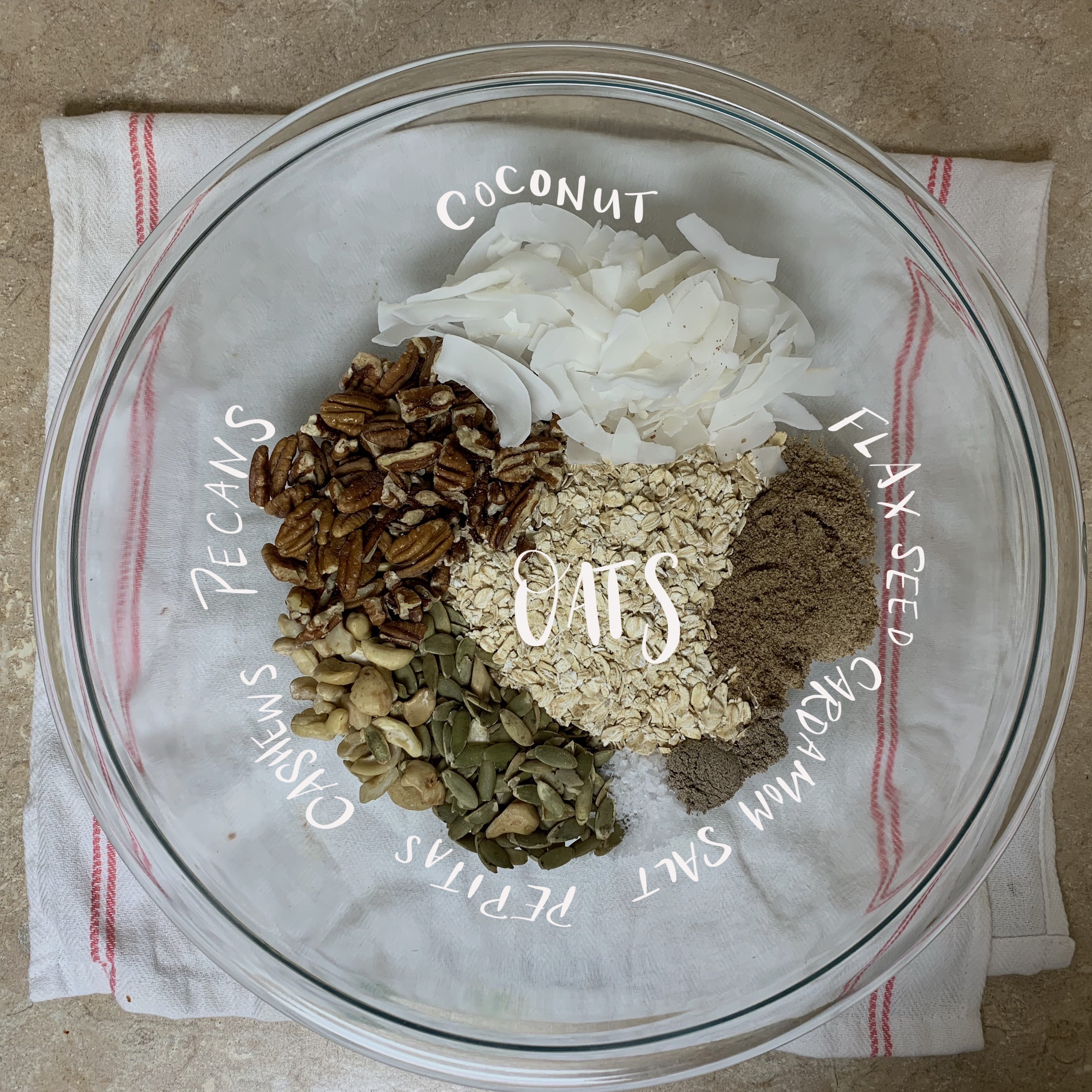 I like my granola to be full of little clusters, and I finally realized that the way to achieve this is to really pack it into the sheet pan and not spread it out at all, and then avoid stirring it until it is completely cooled.

I have adapted my recipe from one from Carla Lalli Music’s.  It is so good that I’ve been making it at least once a week and eating it dry, as cereal, or as a yogurt topping.  I’ve adapted the recipe by cutting it in half (because it’s just a more manageable amount and I’m really just making this for Rob and myself) and adding ground flax seeds.  I like this addition because I found that it helps bind the granola.
Recipe

Pre-heat the oven to 350 degrees.  Start by mixing together the oats, nuts, coconut, flax seed, salt and cardamom.  Don’t mix in the fruit yet.  It is going to get mixed in after it comes out of the oven.  I made this mistake the first time I made this granola and had to painstakingly rake golden raisons out of my mixture.  They look sooooo similar to walnuts.  Don’t do this to yourself.  Add the olive oil and maple syrup and stir until everything is well-coated.

Pack the mixture into a sheet tray, only use about half the pan, don’t spread it out.  Pull the granola out of the oven when your kitchen starts to smell like toasted nuts and everything is sort of golden brown – about 25-30 minutes.  The cooking time really depends on your oven.  I would play around with lower/longer cooking. 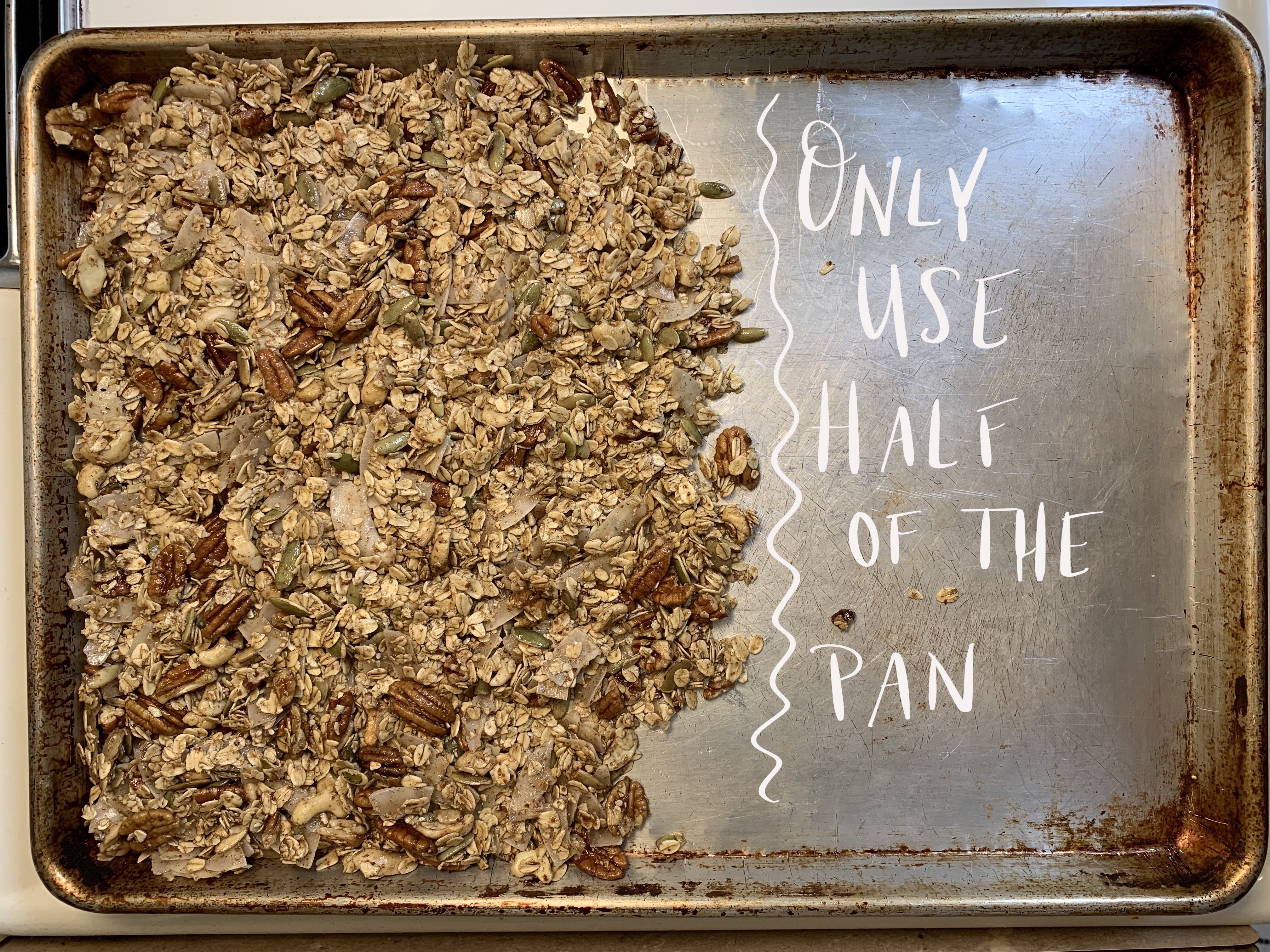 Once the granola is out of the oven, sprinkle the dried nuts overtop and press them in.  Do not stir our break up the granola until it is completely cool.  Resist picking out little clusters and snacking on them because it will be like molten hot and really not enjoyable. 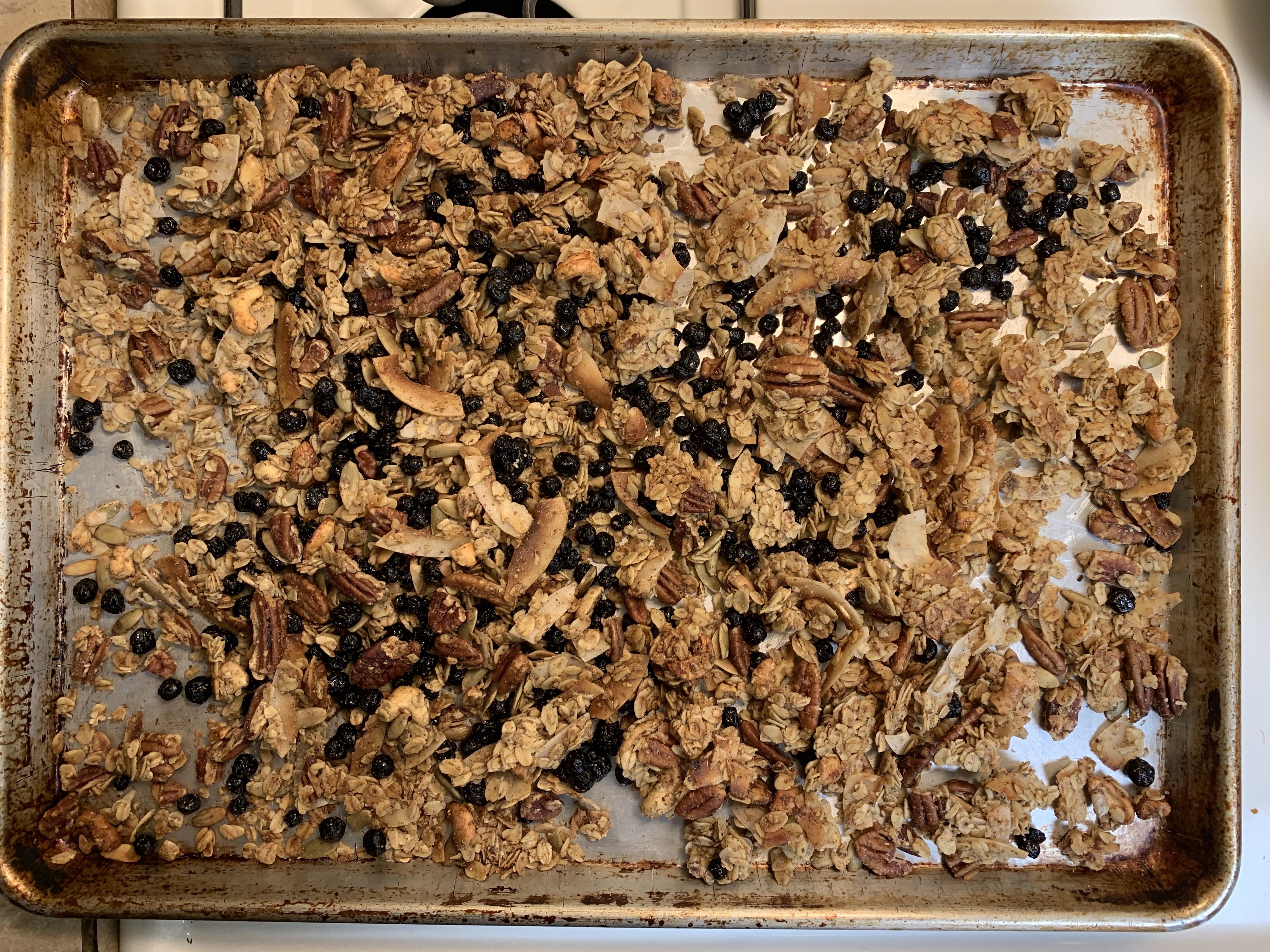 So clustery!
So far my favorite combos are golden raison / walnut, cashew / cranberry, and pecan / dried blueberry.  I have also just done a mix of everything.  I really like flavoring it with cardamom, but cinnamon would be fine, too.   Let me know if you make this or if you have any interesting flavor ideas!